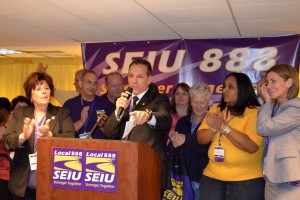 Over 200 SEIU Local 888 members and guests gathered for their bi-annual membership convention to listen to inspirational speakers, vote on a proposed new dues structure and consider other union business.

The meeting was held on Saturday, October 13 at the SEIU 1199 union hall in Dorchester, Mass.  SEIU Vice President Tom Woodruff was the keynote speaker.

President Mark DelloRusso and Secretary-Treasurer Brenda Rodrigues made a presentation on the proposed Dues Equality plan that would put all members on the same 1.6 percent dues structure.  It was debated and discussed on the floor of the convention for more than an hour.

The resolution for Dues Equality passed with 139 Yes, 35 No, 2 Blank, a 3.5 to 1 margin in a secret ballot vote after a three hour voting period.  The new dues structure will be phased in beginning in 2013.

"The convention was a testament to the members of Local 888," said DelloRusso.  "Their response to the Dues Equality proposal and the commitment to building our union was truly an inspiration for us all.  Now we must build on the momentum from the convention to move forward by winning better contracts and providing stronger representation."

Members also passed a resolution urging resistance to employer efforts to shift insurance costs to workers and strongly supporting reforms that build on the national Medicare program as a model to contain health care costs and the best way to achieve a single high standard of health care for everyone in America.

A resolution on a Financial Transaction Tax (FTT) failed to win support from the Local 888 executive board, but nevertheless was adopted by the membership after a presentation by a member on the floor of the convention.  The FTT would place a half a percent federal tax on financial transactions, yielding as much as $350 billion a year in new revenues for much needed services and other social benefits.

The convention was the largest since Local 888 was chartered in 2003.

Resolutions In PDF format for Downloading:

3. Resolution on Leading the way to Win Comprehensive Healthcare Reform

4. Resolution in Support of a Financial Transaction Tax