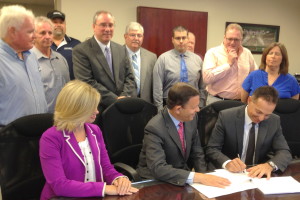 Treasurer Grossman could barely contain his excitement about concluding a timely agreement with a minimum of acrimony or disagreements.

"I've embraced unions and collective bargaining my whole life [in the private sector] and I've never been prouder than I am now of the two strong teams that came together to get to 'yes' with this contract," said Grossman. "It's a win – win that comes with the mutual respect we've established here at the Lottery."

DelloRusso praised all the stewards for getting the contract done in a timely fashion and particularly thanked those who travelled long distances from the regional offices for the long negotiations with management.

Reflecting back on the bargaining process, Luciano said, "We wanted to focus on some of the ambiguities in the contract and strengthen some of our language.  Our bargaining team felt it was especially important to have additional protections for our job security."

"As result we won new language that is clearer on employee protections such as bumping rights and leave time," Luciano concluded.

The contract has wage increases of 1.5 % every six months for 3 years.

The ratification vote the highest in recent memory with members voting 234 to 5 to accept the contract. 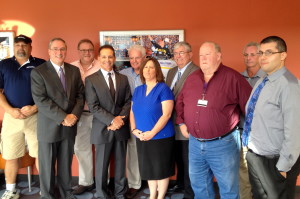