It would be hard to find a better example of the need for paid family leave for City of Boston employees than Damali Simmonds. The new mom, who gave birth to a baby girl on April 11, says that the first months are essential bonding time between parent and child, but that current city policy makes that difficult, if not impossible. 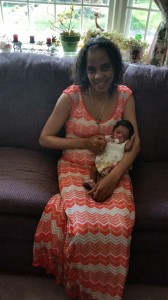 New mom and City of Boston employee Damali Simmonds says that the absence of a paid family leave policy adds more stress to an already stressful situation. “You don’t have to be a psychologist to figure that out.”[/caption]

“These first months are so important,” says Simmonds, who works in the mailroom at the Boston Water and Sewer Commission (BWSC). “This is not the time that you want to be worrying about how you’re going to pay the bills, or how you’re going to find daycare for a newborn, when most places won’t even provide care for a baby under three months old.”

Simmonds told Boston City Councilors about her situation in April, and urged them to approve a paid family leave policy that applies to all city workers. A new ordinance passed by the Council extends paid leave to just 635 city employees, none of whom are covered by collective bargaining agreements. The new policy excludes 7,152 union members who work for the city and 6,721 members who work for the Boston Public Schools. Simmonds points out that four of her co-workers at the BWSC either recently became parents or are about to. “It’s a slap in the face that the only people who are eligible for paid family leave are either managers or directors. That’s unacceptable. We work just as hard as they do.”

Simmonds is currently on unpaid leave from her job; she’ll return to work on July 11. And while she says that she’s grateful to have time with her daughter Malia, the fact that her leave is unpaid has made an already stressful time even more so.

“It’s a very emotional and physically stressful period, because you have to adapt to be able to take care of a small person and take care of yourself at the same time,” says Simmonds. “Part of the stress is not having the finances. If you’re spending all your time thinking about money, you can fall into post-partum depression. You don’t have to be a psychologist to figure that out.”