What would you do if you found $600 lying on the sidewalk? That’s exactly what happened to Local 888 member Ramon Brito this summer. But Brito, who works as a maintenance employee for the Lawrence parking division, didn’t even consider keeping the money. 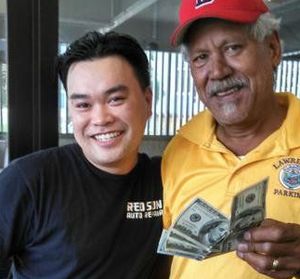 As Brito explained to a reporter from the Lawrence Eagle Tribune, “his father taught him when he was young that if he found something that wasn’t his, he should return it to the rightful owner.”

But solving the mystery of who had lost the money would take some investigative work. Brito and Rodriguez contacted the parking attendant on duty that day to see who had been in the garage office. Eventually they would trace the $600 to Alan Chan, the Braintree-based owner of an automotive repair business.

“I was really surprised,” said Chan, after hearing from the parking attendants that his money had been found

“I was really grateful, again, because as you well know if someone finds a dollar on the street, $50, whatever it is, because there’s no name on it, it’s very likely it’s not going to be returned. Anyone could have just pocketed it, have a little spending money for the summer.”

When Chan came to pick the money up the next day, he got to meet the Local 888 members who’d been involved in its return.

“Everybody was happy, Ramon was very excited to give it back, and Alan, he’s such a nice guy, so we felt very good giving it back to a person like Alan,” coworker Lucius Santiago told the Eagle Tribune.

As for why he opted to return the money rather than hold onto it, Brito said the answer was simple: his conscience wouldn’t let him. In fact, when Chan offered him $100, Brito refused the offer.