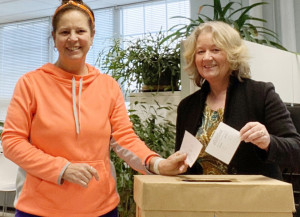 ON THE EVE OF THE CRISIS: Mashpee chapter leaders Teri Lambert, left, and Judy Mooney organized the contract vote. The new contract was overwhelmingly approved.[/caption]

On the eve of the age of COVID-19 lockdowns, dispatchers got a boost in pay as part of a new contract for Local 888’s Mashpee chapter. The contract, which includes cost-of-living increases of 6 percent over a three-year period, was overwhelmingly approved.

Now, members are looking forward to getting their raises when the new contract begins.

In addition, dispatchers “will maintain their current anniversary dates and will advance to the next step of the July 1, 2020 wage scale on their anniversary date.” A memorandum of understanding was signed March 19.