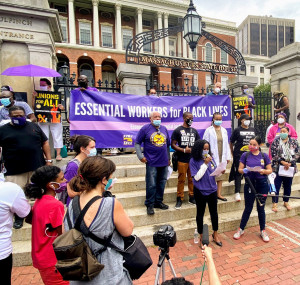 TAKING IT TO STATE HOUSE: SEIU members took part in a recent Boston rally that spotlighted essential workers, who are often black and Latinx, and demanded economic justice for all.[/caption]

Local 888 was a big winner at the polls on Primary Day, with eight candidates endorsed by the local’s Committee on Political Action winning competitive races. COPA also endorsed six candidates running unopposed in the Democratic primary.

In the weeks leading up to the primary, members staffed Local 888’s virtual phone banks as part of a campaign to get out the vote. Members of the MassDefenders, a Local 888 affiliate, also took part.

Members went all out to support the re-election campaign of state Sen. Mike Brady, a former Local 888 member representing the 2nd Plymouth and Bristol District. Get-out-the-vote calls focused first on the 300 or so Local 888 members in his district.

In addition, Local 888 members focused on the re-election of state Rep. Michelle DuBois, who represents the 10th Plymouth District and previously served as a Brockton City Councilor.

“It is vital for our union to have allies in the Legislature,” said Local 888 President Brenda Rodrigues, who made calls along with other 888 members. “That’s even more true in the COVID-19 era — in which we need to have legislators who will voice the concerns and needs of our members.”

The get-out-the-vote drive paid off.

DuBois got 58 percent of the vote against John Lally, a Brockton councilor who ran as a law-and-order candidate. He was supported by a political action committee, the Massachusetts Majority PAC, closely tied to GOP Gov. Charlie Baker.

For his part, Brady got 57 percent of the vote against primary challenger Moises Rodrigues, a Brockton councilor and former mayor, getting 42.8 percent.

The Local 888 Committee on Political Action urges all members to go out and vote in the Tues., Nov. 3, General Election, which will feature the U.S. presidential race. (See below for more details.)

Other Local 888 primary wins include:

In addition, Local 888 backed these candidate who ran unopposed in the primary: