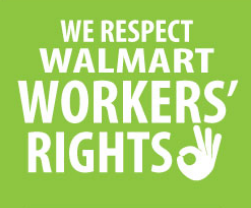 Last month, employees at 28 different Walmarts all walked out of work simultaneously to stand up for better wages and respect in the workplace. But this Friday — Black Friday — it’s gonna get even bigger.

Flashmobs, online mobilizations and mass demonstration are just a small portion of what will sweep more than 1,000 Walmarts nationwide on the biggest shopping day of the year.

Join us in standing with Walmart strikers and find out how you can take part in the nationwide fight for good jobs.

For the first time in Walmart’s 50-year history, workers at multiple Walmarts walked off the job in October to demand a living wage, affordable healthcare, and respect from their employer. The walkout caused a ripple effect, and soon there were strikes in 13 cities across the country. But Walmart refused to listen, and has instead retaliated against their workers.

MASSUNITING is an unequivocal advocate for workers' rights, and we're proud to stand with thousands of Walmart employees nationwide on Black Friday who are taking unprecedented action. Together, we'll protest Walmart’s continued retaliation against its employees, and advocate for improved working conditions and fair schedules. But most of all, we're fighting for respect for Walmart workers.

**This Friday (or even Thursday night, when the stores open!) gather with friends, family, and co-workers to stand with Walmart strikers, and fight for up for better jobs and a better future.