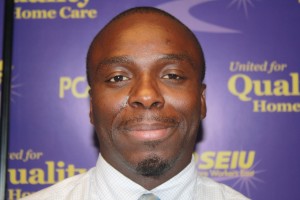 Daniel Dessin has a message for SEIU Local 888 members: the fiscal cliff is coming and it’s serious. “We’re talking about automatic budget cuts that are going to take a huge toll on essential services,” says Dessin, a former Local 888 member who is now a political organizer.

The fiscal cliff is short-hand for across-the-board tax increases and deep budget cuts scheduled to go into effect in 2013 unless Congress acts. And while the political outcome may be uncertain, the economic forecast of going “off the cliff” points to a return to recession and job losses. How will the fiscal cliff affect you? The average family will see a tax increase of $2000, while essential services including Medicaid, Head Start and programs for veterans will see funding slashed.

Dessin and a team of Local 888 member political organizers have been going door to door and chapter to chapter to talk to members about the consequences of the fiscal cliff. “One way or another, this will have a negative impact on you or someone you know. We need to let members of Congress know—they were sent to Washington to do a job.”