Members of Local 888 who belong to three different units in Scituate have a lot to celebrate these days. All three units—the Scituate Aides and Tutors, the School Secretaries and Clerks and the School Cafeteria Personnel—have negotiated and ratified new contracts with strong member support. All three units saw success at the bargaining table because they engaged members, encouraged member input and spoke up and stood their ground when necessary. Here’s a look: 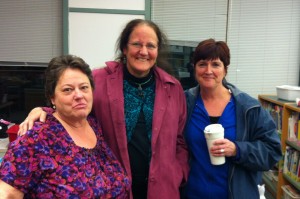 Scituate Aides & Tutors Don’t call them Scituate Aides & Tutors anymore— meet the Scituate Paraprofessionals. The paras say that the new name is more than symbolic; it reflects a demand by the membership to be treated as professionals. That new spirit is also reflected in their recently ratified contract. In addition to raises of 1, 1.5 and 1.5 percent over a three year contract, highlights of the agreement include the creation of an employee sick leave bank, release time for union leaders, and language that ties layoffs and recalls to qualifications and seniority. The paras will also be paid for a full hour of work when they substitute; the previous contract reimbursed them for just 50 minutes. But the paras say that they are most pleased that the new contract recognizes the essential services they provide.“The Superintendent and the Chairman of the School Committee listened to us, investigated our proposals and recognized the need to create a well-deserved wage scale for us,” says Joan Pritchard, the Local 888 field representative who assisted the negotiating team. 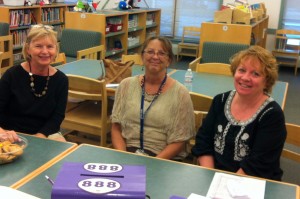 Scituate School Secretaries and Clerks Teamwork works. That’s the lesson of the successful contract negotiations recently concluded by the Scituate Secretaries. The unit signed off on a three-year contract that includes raises in each year. Other gains include an increase in tuition reimbursement, an increase in sicktime buy back and release time for union meetings. One group of school secretaries works twelve month a year, while others work ten months a year. The year-round group agreed to give up a holiday the day before Thanksgiving so that their ten-month counterparts would receive three additional vacation days to be used any time during the school year. The result: a contract that was overwhelmingly approved by the membership and a stronger unit where all members have a voice. 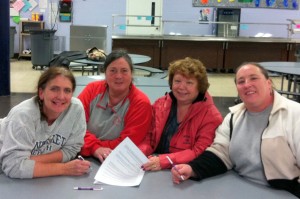 Scituate School Cafeteria Personnel Scituate School Cafeteria Personnel approved a new contract by a unanimous vote of 19-0. The three year contract includes a position, the high school kitchen manager, that was removed from the bargaining unit years ago and that current members fought hard to get back. The contract includes raises in each year, increases longevity and extends vacation days to cover half days. Team members also were successful in getting contract language that will help them run their unit more effectively, including extended time to file grievances and release time for officers.