Yarmouth dispatchers Jayne Fogarty and Mike Kubiak have both gone above and beyond the call of duty to assist local police officers in the field. Thanks to Local 888 field representative Joan Pritchard for helping to share their stories with the Spark.

Dispatcher Jayne Fogarty “There had been several house breaks in Yarmouth over a period of several days. The Police saturated the area and asked for help from the local citizens via the news.One particular shift I came in 20 minutes early and overheard one of our detectives asking the dispatcher on the prior shift to run the names of two individuals. As a common practice, I also wrote down their names. A few hours later, we received a call regarding a purse snatching at a local grocery store. The female suspect used the victim’s credit card and signed it, using her nickname and an undecipherable last name. I looked in our “in-house and cross reference” computer for all females with the first name as written on the credit card slip. I then pulled up all drivers’ licenses to see if the picture matched the description given by the store clerks.

Meanwhile, the officer investigating the call received information about another name, which he thought was a last name, and a possible area where this female suspect lived. The name rang a bell as it was uncommon, and I realized that it was the same female that the detective had asked the prior dispatcher to run. I pulled up her driver’s license and home address and confirmed that she fit the description. I also advised the officer that we had a case involving a purse snatching from a home, several days prior, with a female fitting that same description. Officers and detectives investigated, obtained a search warrant, and discovered stolen items from various house breaks as well as the purse snatchings. The officer and detective both stated “if it wasn’t for the diligent work of the dispatcher, we would have never been able to solve those crimes so quickly.” 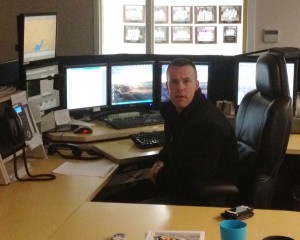 Dispatcher Mike Kubiak Yarmouth Dispatcher Mike Kubiak received a call of a disturbance involving a suicidal male with a knife. By the time the officers got to the house, the male had taken off on foot. Officers did an area search looking for him. They also contacted dispatch for a K-9 officer so Kubiak issued the call. While waiting for the K-9 to arrive on the scene, Kubiak obtained the suicidal male’s cell phone number and immediately called for a trace. Once he obtained the trace, he got the longitude and latitude for the male’s possible location. By this time, the K-9 officer had arrived on scene and begun the search with the officers. Meanwhile, dispatcher Kubiak put in the coordinates and zoomed in on the location using Google Earth. He took a picture of his computer screen and sent it to the K-9 officer’s cell phone. Kubiak was able to pinpoint the suspect’s location, hidden behind a septic bunker against a vacant house. Due to the creative work of Dispatcher Kubiak, the suicidal male was located and the K-9 Officer was able to convince him to drop the knife.

Service under threat Dispatchers like Mike Kubiak and Jayne Fogarty provide an essential service to their community. But a proposal to regionalize dispatch operations in Yarmouth and other communitieis would eliminate the kind of personal relationships described in these stories. Under a regional dispatch system, dispatchers are reduced to names and numbers with little connection to emergency personnel or the local citizens who count on them.