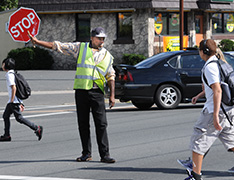 Joe Perry didn’t set out to become a leader. This 61-year-old Springfield crossing guard describes himself as a “quiet type.” But when he noticed safety concerns that endangered both students and crossing guards, he spoke up. “The kids shouldn’t be in danger and neither should we,” says Perry, who became a crossing guard two years ago after retiring from a job with the telephone company. When Perry began the job escorting student’s across Springfield’s busy streets, the city’s 125 crossing guards had no union. And that meant, as Perry soon discovered, that they had few rights or protections. “If there was a dispute with management, people felt like they were totally on their own. They had no back up at all.”

Perry and his fellow guards began the process of forming a union and negotiating a contract that would provide them with essential protections. The crossing guards, who joined Local 888 last year, recently negotiated their first contract. “We feel like we have backup now,” says Perry. “We’re not so alone.”

When two crossing guards who also serve as cafeteria lunch mothers were terminated recently for violating a local provision against holding more than one city job, Perry and other union leaders fought for their reinstatement. “Because we have a union contract we were able to tell management, ‘you’re wrong,’ and get these women reinstated,” says Perry. The guards, one of whom is 79, are now back on the job. Most importantly, says Perry, members of the new union have had a chance to see their hard work pay off. “Now when there’s a problem, we sit down and discuss it. That’s a big change from the past.”

Members are now engaged in a process that Perry describes as “building a stronger union.” As for his role—Perry was recently named chapter chair by his fellow members—he says that he never set out to become a leader, just to “know what was going on.”

But while his development as a union leader has changed some things for Perry, his love of his job remains as strong as ever. Helping the students, who range from elementary-aged kids to high schoolers, twice a day, Perry is a regular presence in their lives. “I know them well enough that I can tell when something is bothering them.” He also relishes the opportunity to teach them some important lessons. Chief among them: in the battle of child vs. vehicle, the vehicle always wins. “You can’t just walk along staring up at the sky. You don’t see the driver, the driver doesn’t see you, it doesn’t end well,” says Perry. “The kids listen to me though. I know how to get their attention.”