Local 888 President Mark DelloRusso and Field Director Lisa Field attended Workers' Memorial Day, an event observed every year on April 28 to remember workers killed and injured on the job.  In Massachusetts, Workers' Memorial Day was commemorated on the steps of the State House and was observed by slain workers' family members, union members, safety experts, and state officials. 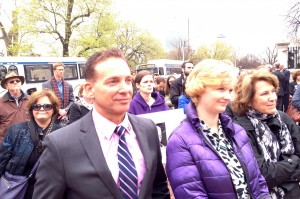 "The memorial event and the report both highlighted the fact that work continues to kill and maim workers in epidemic and alarming numbers," said Mark DelloRusso.  "The saddest aspect to the loss of lives and limbs is that most of these work-related injuries and illnesses are completely preventable."

Dying for Work also highlights the startling rate at which occupational illnesses are killing workers. In 2013, the report estimates 480 workers died in Massachusetts from occupational disease. It also states a conservative estimate of 1,800 workers in Massachusetts who were newly diagnosed with cancers caused by workplace exposures, and 50,000 as the number of workers seriously injured on the job. 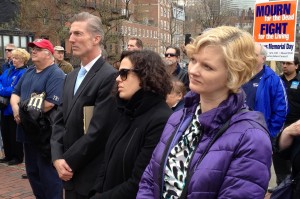 The report also showed high number of serious occupational health and safety issues facing municipal workers.  For example, on February 4, 2014, Michael McDaniels, 48, and his co-worker Scott Spurling were in a trench, repairing a broken water main.  A backhoe working adjacent to the trench moved forward, causing the backhoe stabilizer arm to strike them, killing McDaniels and injuring Spurling.  Husband and father of a nine year old girl, McDaniels had worked at the DPW for 26 years. 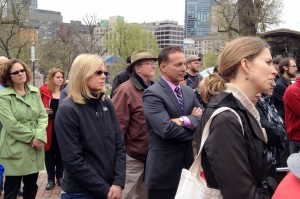 Mark DelloRusso listening as the names of workers killed on the job in 2013 are read.[/caption]

Despite the hazardous nature of their jobs, unlike private employers, municipal employees are not covered under the federal Occupational Safety and Health Act.  This has resulted in inconsistent implementation of safety programs.  There is, however, a state law that charges the Department of Labor Standards (DLS) with inspecting municipal workplaces and determining the measures needed to ensure worker safety.  DLS can cite and fine municipalities that fail to address the hazards they document through their inspection.

"Ensuring safety and health is a top priority for SEIU Local 888's members, said Lisa Field.  "As a public service union, we will continue to fight alongside MassCOSH until all public employees have OSHA standards just as those in the private sector do.  We also recognize the need to partner with management to activate health and safety committees and pool resources across municipalities to provide more safety training." 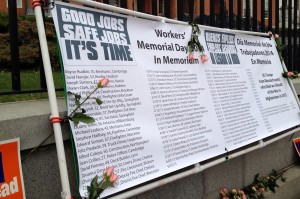 Workers' Memorial Day banner with the names of workers who were killed on the job in 2013.[/caption]

To protect workers, the report stresses many actions need to be taken, including strengthened OSHA regulations and enforcement, including use of criminal prosecution to deter employers who recklessly endanger workers' lives and passing legislation to extend OSHA protections to public employees.