Malden's school custodians and their community supporters rallied for better services and local jobs on June 3 -- and then attended a crowded city council meeting where a veto-proof majority of councillors voted to transfer oversight of their jobs from the School Dept. to the Public Facilities Dept. 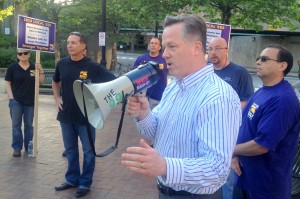 Councillor Neil Kinnon spoke at the rally. "You're not to blame for the schools not being properly cleaned," said Kinnon. "The current budget isn't in line with the cost to get the job done right."[/caption]

Before the vote on the transfer could take place, councillors voted on a motion to change the order of the council's agenda and then on Councillor Ultrino's motion to reconsider the proposal made by Councillor Neil Kinnon which lost by a 5 to 6 vote at the May 27 council meeting.

Once those motions both passed, city councilors made their case for and against Councillor Kinnon's proposal.  Then Councillor Ultrino suggested that school custodian and Local 888 member Steven Krzywicki be allowed to address the council.

"Two years ago we agreed that the custodians should be managed by the school system because historically they had been mismanaged on the city side," said Krzywicki.  "We agreed to the move, and as a part of that agreement the Malden school committee agreed to hire day and night supervisors and do regular evaluations to ensure accountability and school cleanliness. We welcomed this chance to be judged on the merits of our work." 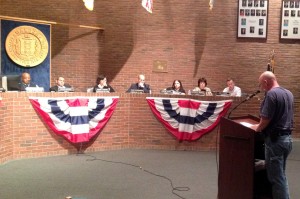 School custodian and Local 888 member Steven Krzywicki addressed the council. Given the School Department's insistence on outsourcing more custodial jobs and their budget constraints, we feel the city would be a better home for custodial services as long as there is proper supervision and regular evaluations."[/caption]

"Unfortunately, no supervisors were hired and not one single evaluation was done," Krzywicki continued.  "The school system's total failure to track any performance and cleanliness measures in any quantifiable way is a breach of faith, a breach of contract and wholly unfair to us.  Given the School Department's insistence on outsourcing more custodial jobs and their budget constraints, we feel the city would be a better home for custodial services as long as there is proper supervision and regular evaluations."

The motion to transfer "oversight and control" of the custodians from the School Dept. to the Public Facilities Dept. passed 8 to 3.  Then two motions to reduce the School Dept. budget by $1,371,285 (an amount equivalent to the total allocation for school custodial services) and increase the appropriation to Public Facilities by $1,371,285 to allow for oversight of the school custodians passed 9 to 2.

"Winning the vote was an important step in the right direction towards improving school cleanliness and keeping good jobs in the community," said Mark DelloRusso, president of SEIU Local 888.  "It gives the custodians momentum for additional funding and better management to get the job done right.  We're looking forward to working with Mayor Christenson and the council to finish the budget process and begin a new chapter in Malden."

Pictures from the rally and the city council meeting are available by emailing rwilson@seiu888.org.