A statewide day of action to raise wages for low-wage workers is scheduled for June 12—but Head Start members who work for the Montachusetts Opportunity Council (MOC) aren't waiting to show their support for higher wages. 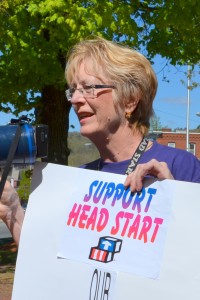 "Since we can't get to the rallies, we want to contribute to the effort right now," says Melissa Warren, the chapter chair for MOC. "We have members who work at MOC, taking care of kids, and making as little as $8.25 an hour. It's outrageous they are being paid so little for such essential work," says Warren.

June 12 is a day of action for low wage workers to say, "Low Pay is Not OK." There will be marches and rallies in Boston, Worcester and Springfield. (For rally locations and transportation, visit www.seiu888.org.)

Warren and her co-workers at MOC are planning to wear stickers on-the-job that say, "Low Pay is Not OK." Warren, who works at MOC as a family social worker in the Clinton Head Start center, says that she hopes that Local 888 members will do the same—regardless of how much they earn.

"I make decent pay, but we all have to care about each other. Imagine a human service agency that is mostly run by women and is supposed to care for poor people. Paying so little is just not right," says Warren.

No matter what your hourly pay, show your support for the Fight for $15 by wearing this sticker on June 12. Order stickers at: myunion@seiu888.org[/caption]

Order Low Pay is Not OK stickers for the day of action ASAP through your union rep, or by emailing myunion@seiu888.org.