Sixteen early childhood educators and staff at the Lowell Day Nursery (LDN) have not received raises to keep up with the cost of living or the increase in their health insurance in years.  Staff members' health insurance premiums have risen from about $30 a week in 2008 to more than $55 in 2014.  Meanwhile, the only raises staff have received averaged .27 cents in 2008 and .32 cents in 2012.  In other words, pay for these hard working and highly qualified educators has actually been reduced! 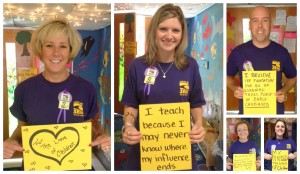 Local 888 members are pictured on Facebook holding signs with short statements about why they teach at LDN.[/caption]

Local 888 member Scott Larmand set up a Facebook page for the group that features his co-workers holding signs with short statements about why they teach at LDN.  In just two weeks, the page got more than 150 "likes" and some very supportive comments from parents of children who attend LDN.

Now the group has launched an online petition to LDN's board of directors saying, "It's time for respect and a real raise!"

Local 888 member and UMass Professional Darcie Boyer made a little flyer for the teachers that says "Super Sid supports his teachers at LDN."[/caption]

Darcie Boyer, a Center Manager at UMass Lowell whose son Sidney attends LDN posted a picture of him in a superhero costume, with a purple cape that said "Super Heroes for Fair Pay."  Boyer made little flyer for the teachers that says "Super Sid supports his teachers at LDN."  Boyer said, "Cute kids, and acts of solidarity, do get people's attention. I was hoping that the teachers could use his picture to help the cause!

Local 888 members can support the LDN campaign by 'liking' their Facebook page at  and signing their online petition to the board of directors.