Over 75 SEIU Local 888 members gathered for the bi-annual membership convention to listen to inspirational speakers, vote on three policy resolutions, and consider other union business. 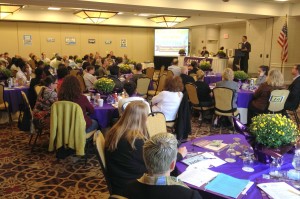 Local 888 President Mark DelloRusso addresses
the members at the 2014 convention.[/caption]

The meeting was held on Saturday, October 4 at the DoubleTree Hotel in Westborough, Mass.

President Mark DelloRusso and Secretary-Treasurer Brenda Rodrigues made presentations on the state of the union followed by reports from the heads of each union department.

“This convention was mainly a celebration of what we have accomplished together over the last two years,” said DelloRusso. “With a united executive board, strong finances and growing membership participation in the union, Local 888 is on very solid footing. Now we must build on the momentum from the convention to continue winning better contracts and providing stronger representation.”

Members passed aResolution urging all members to commit to finding ways to make employers pay a minimum of $15 per hour through collective bargaining, community pressure campaigns, or city and state legislation. 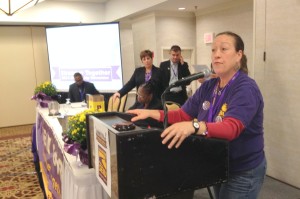 Christine Oberhelman from the Lowell Day Nursery told members about a campaign there to win raises and respect.[/caption]

A second Resolution, adopted unanimously, endorsed “Yes on Question 4” to provide an earned sick time benefit to almost one million workers in Massachusetts who don’t currently receive it. The resolution urged all Local 888 members to volunteer to do canvassing, phone banks, Election Poll work, etc. to win the ballot initiative.

The final Resolution committed Local 888 to organizing a grassroots campaign to significantly increase Local Aid in the FY’16 Massachusetts state budget. Since passage of Proposition 2½, municipalities have increasingly relied on Local Aid from the state to fund municipal services. As a result of the recession, Local Aid has been slashed 36 percent from 2008 levels. While state tax collections have increased more than five percent to $1 billion this year, Local Aid is currently just half of what it was in 2001.

More pictures from the convention can be viewed by clicking here.

_Copies of the three resolutions adopted at the convention are available on the Local 888 website at www._seiu888.org. 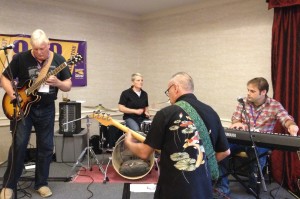 After the convention, members were entertained by the "Crazy 8’s"[/caption]