When the community organization that Enio Lopez volunteers for offered him the chance to attend the recent People’s Climate March in New York City, Lopez seized the opportunity. “I learned about it from the Chelsea Collaborative and decided to go,” says Lopez, who has worked as a chauffeur for the Chelsea Soldiers Home for twenty years and is a founding member of Local 888’s Latino Caucus. “I’m so glad I did. All of those thousands and thousands of people—it was the biggest march I’ve ever been part of.” 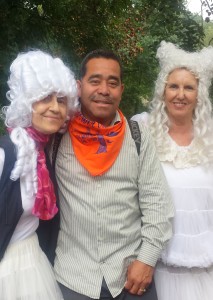 Enio Lopez, a Local 888 member and environmental activist in Chelsea, poses with “Mother Earth” at the recent People’s Climate March in New York City. The march, which was endorsed by SEIU and Local 888, drew an estimated 300,000 people from across the country.[/caption]

The event, which drew an estimated 200,000 people from across the country, all of whom converged on the streets of New York City to warn against the devastating effects of climate change, was endorsed by SEIU Local 888. Lopez says that he was thrilled to see so many fellow union members in the crowd, including members of SEIU 32BJ, which represents janitorial workers in New York. “There were union members from as far away as Los Angeles and Miami,” says Lopez. “I gave them high-fives.”

Lopez’s interest in environmental activism may have taken him on the road, but its origins lie closer to home: in Chelsea. “There was a group of us who were very upset about all of the trash in the streets,” recalls Lopez. The Community Enhancement Team, started by Lopez and eight other Chelsea residents, first set out to document the local trash problem. “We showed just how much trash was in the streets and how much recyclable material was going right into the trash,” says Lopez.

The group also came up with an action plan to address the problem. Working with the city manager, Lopez and his fellow activists were able to get recycling bins. They then went door to door asking people if they wanted to sign up for the recycling effort. Since the project started, says Lopez, the percentage of households in Chelsea that recycle has risen from 3% to 63%.

Lopez says that he hopes that other union members will get active in their own communities, if they aren’t already. “If we all do a little volunteer work where we live it can make such a huge difference.” And if you have a chance to participate in an event like the People’s Climate March, Lopez hopes you’ll take it. “The march was unbelievable and I’m so glad I had the opportunity to experience it.”