State Contracts Settled The long wait for approval of the state contracts is over. Governor Patrick signed the FY2014 Supplemental Budget on Oct. 31. Local 888’s Unit 2 state contracts were approved which includes UMass Lowell, the Soldiers Homes, State Police Dispatchers, and other agencies under the Alliance, the Lottery, the Registries of Deeds and the MassDOT.

“Thanks to intense pressure from our union and other public sector unions, we were finally able to get these contracts done for our members,” said Lisa Field, Director of Field Operations “It was a long and often frustrating process.”

Got questions? Email Lisa at lfield

Orange Maintenance Members Ratify New Contract Orange Maintenance unit recently reached a four-year agreement after going through mediation with a one year extension for 2013. “It was quite a battle for a while going back and forth,” said Chapter Chair Dick Matthews.

“Management wanted concessions on longevity, while we felt that longer service members should be rewarded. We eventually compromised with no longevity for new hires.”

The contract also establishes new joint Labor-Management committee as well as a process for requesting a flexible work schedule in hardship situations. Members will receive wage increases equal to 5% over three years. 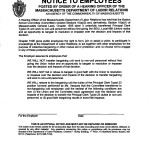 Boston School Dept. ULP Last year the Boston School Dept. transferred Clerk Typist bargaining unit work from Local 888 members to a manger.  The union filed an unfair labor practice charge with the Department of Labor Relations saying that management had a obligation to give the union notice and bargain over the decision and its impact.

In August, the DLR ruled in favor of Local 888 (see DLR posting at right).  Now management must return the position to the bargaining unit and properly post the job which will be filled by a union member!

Custodians' ratify new agreement with Malden School Committee that will improve school cleanliness and preserve local jobs After several months of negotiations, custodians voted 18 to 3 on Oct. 25 to ratify a new agreement with the Malden School Committee.  The hard-fought agreement comes after a high profile campaign by the custodians and their union to stop the city from outsourcing their jobs and to address persistent concerns about school cleanliness.

Last April, the Mayor and the School Committee proposed outsourcing the custodian's jobs to a private cleaning company where employees would have lower pay and no job rights.

Faced with the prospect of losing their jobs, the custodians reached out to the community and to their elected officials to stop the plan.  As a result, the City Council voted last June to provide an additional $2,226,293 to the School Dept. to keep all 28 custodians working at the Malden Schools.  The funding also provided for hiring a much needed custodial supervisor to ensure improvement in school cleanliness.

The new contract requires more accountability from both employer and employees regarding evaluations of the custodians work and features an entirely new "performance evaluation" form. The custodians also agreed to some alterations in the provisions that allow management to discipline workers for poor performance.

Union members will receive 2% pay increases each year of the two year contract.

"I think we found the right balance to improve school cleanliness and keeping local jobs in Malden," said Rich Cutone, a school custodian for 27 years and union vice-president.  "We are glad it's finally come to a conclusion and we're moving forward.  We deeply appreciate the support we received from so many parents, students and elected officials."

The Malden School Committee still needs to approve the contract before it can be implemented.