Local 888 was an active member in Raise Up Massachusetts, a coalition of more than 100 community organizations, religious groups, and labor unions, which organized a grassroots campaign to win earned sick time for hundreds of thousands of 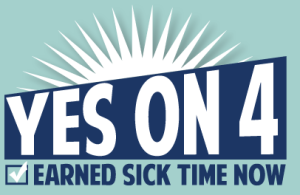 “No one should have to choose between the job they need and the family they love," said Mark DelloRusso.  "With passage of earned sick time, no parent in Massachusetts will be forced to choose between going to work to put food on the table and staying home to take care of a sick child.  No worker will risk losing their job because they need to see a doctor."

This vote shows that the people of Massachusetts fundamentally believe that the ability to care and provide for themselves and family members is a right, not a privilege. Earned sick time will help small businesses succeed by making employees healthier and more productive, and will keep money in the hands of consumers who spend it in their neighborhoods, helping grow our local economies. For the almost one million workers in Massachusetts who today can’t take a single day of paid sick time, this vote was a major victory.

In June, the Legislature passed and Governor Patrick signed legislation giving Massachusetts the highest minimum wage in the country. Raise Up Massachusetts then led the campaign to ensure access to earned sick time for all workers in the Commonwealth by passing Question 4.