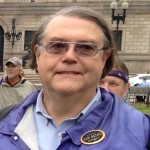 The media has noted the passing of Benjamin Bradlee, The Washington Post editor whose coverage of Watergate won his newspaper a Pulitzer Prize, and immortality by being played by Jason Robarts in an Oscar winning performance in the film "All the President's Men."

Now, let us remember a not so famous man.

Frank Willis was the security guard who found tape on the door of the Watergate. Thinking a construction crew left it, he removed it and continued his rounds.  When he found the doors taped again a half hour later, he called the Washington Police. The Police plainclothes anti-crime division took the call because the patrol car had broken down.

Frank Willis died at age 52.  He had the unique honor of being the only person in the film All the President's Men who played himself. Reporter Bob Woodward paid a tribute by saying "He's the only one in Watergate who did his job perfectly."

If Frank Willis had not done his duty, the Watergate would be one more expensive building in Washington rather than a metaphor.

Do you have a story to submit? Send it to rwilson