Somerville Dispatchers unanimously ratified a new contract on Nov. 24.  Key components of the Dispatchers' agreement include: 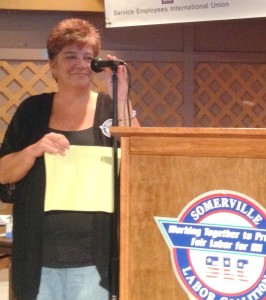 "We are the "first" first responders, taking calls in emergencies and backing up our uniformed officers," said Terri Medeiros, a dispatcher with 19 years of experience speaking on behalf of the union negotiating team.  "After researching what other cities were paying for similar jobs, we were determined to win a pay scale that reflected the value of our service."

"Now residents of Somerville can sleep better knowing that the city has stepped up to respect our department's important contribution to public safety," Medeiros continued.

With ratification, members agreed to give up the "Evergreen Clause" that keeps the terms of an expiring contract in force without change until a new contract is negotiated.  Most other unions in the city have already done the same.

Fourteen dispatchers are members of SEIU Local 888 which also unites dispatchers who work for the State Police, Mass Port, the City of Boston, and the towns of Amherst, Athol, Framingham, Mashpee, Scituate, Uxbridge, Watertown, Webster, and Yarmouth.

Local 888 is a member of the Somerville Labor Coalition that unites public service unions in the community and supports its member unions.