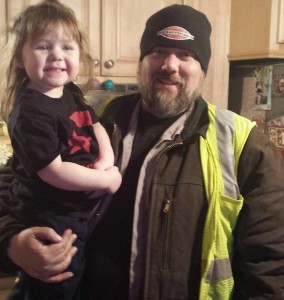 Local 888 member Josh Clancy, who plows roads for the town of Tyngsborough, with three-year-old Lydia.[/caption]

When blizzards occur (like the two that we just experienced in late January and early February), snowplow drivers have to leave their families and travel in some terrible conditions. We count on state DOT and local DPW workers to clear over 36,000 miles of roads in Massachusetts. On a single day, there can be up to 5 million vehicles traveling over 150 million miles on the Commonwealth's roads.

While snowplow drivers – most of whom are members of Local 888 or other public service unions like AFSCME and the Teamsters – often go unheralded, they deserve a huge "thank you" from all of us for their work during these two back-to-back blizzards.

Let's face it, if they didn't do their job, people wouldn't get out of their driveways.

Josh Clancy has been with the Town of Tyngsborough's DPW for six years. He and eight other Local 888 members plow over 100 miles of town roads. The Spark asked Clancy to tell us a little about the work so we can better appreciate what all snow plow drivers do...

"The public has no idea what we do or the sacrifices we make to keep the roads clear," said Clancy. "My guys and I just wrapped up roughly 100 hours each. We aren't subject to the hours of service rules. So in snow storms we often work for 30 hours straight.

"If you've ever worked a double shift, imagine doing that three or four times over. We're not just sitting in a truck…you're living on the end of that plow. One slip up in that huge truck and you could really wreck something.

"We aren't just plowing. Our old trucks often break down in these extreme temperatures -- then you’re lying in a snow bank to make repairs.

"Our families have to accept the fact that when winter comes, everything stops. You can’t plan anything, including weekends or holidays. None of us can go because if you miss your shift, you’re screwing the other guys.

"A lot of times I’ll go home after work, take a shower, eat something and laydown to catch some sleep. Then just when I finally fall asleep, bingo -- I get called back. It can be a bit heartbreaking.

"I'm proud to work for the town and also to be a Local 888 steward. When I'm working, the security of the union and our benefits is always in the back of my head."

Have a story to submit? Send it to rwilson@seiu888.org.