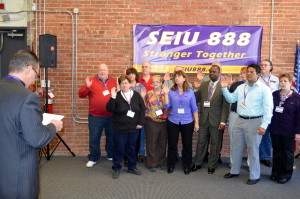 President Mark DelloRusso administered the oath of office to the new executive board and trustees at an April 25 swearing in ceremony.  Congrats to all![/caption]

To qualify for the ballot, all candidates had to submit nomination petitions by February 20, 2015. Because there were no contested seats for any of the positions, all qualified candidates were therefore elected and it was unnecessary to hold an election.

Worcester Housing Authority member Al Zenkus and City of Boston member David Reno were newly elected to the Executive Board.

With the election concluded, there are four vacancies on the Executive Board and one vacant Trustee position that will be filled now that the newly-elected executive board and trustees are sworn in.

Local 888 would like to thank the Election Committee chair Lori Moran, and members Jamie Smith and Enio Lopez for their work overseeing the process.