On April 14 fast food and other low wage workers walked off the job in 230 cities, staging the largest-ever strike in their movement aimed at a $15 minimum wage and the right to form a union. 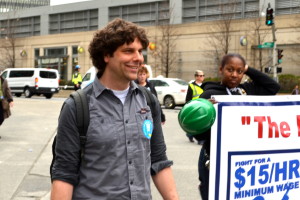 Jonathan Dudley, a member from the Montachusetts
Opportunity Council came all the way from Gardner to attend the April 14 Fight for $15 rally[/caption]

The movement began with a single strike in New York City at the end of 2012 but has grown increasingly larger as the Fight for $15 movement has staged nine other days of coordinated strikes since then. April’s actions even went global, with strikes in Italy and New Zealand.

Dozens of members from various City of Boston departments, the Lottery, Somerville Crossing Guards, Chelsea City Hall and Chelsea Soldiers Home joined thousands of underpaid workers frustrated by low wages at the Boston rally in Forsyth Park, calling for higher wages and protesting growing wage inequality. Public Defenders who are seeking to form a union with Local 888 also joined the rally and carried their own banner.  Click here to see pictures from April 14 march and rally. 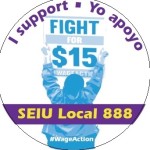 On April 14, members in many Local 888 chapters wore stickers on the job to show their support.[/caption]

“This is important for the families we serve,” said Jonathan Dudley, a Local 888 member from the Montachusett Opportunity Council who traveled all the way from Gardner to attend the rally. “Winning $15 an hour would make such a big difference in the lives of so many working families.”

Meanwhile, members in many chapters wore stickers on the job to show their support. In Fitchburg, Local 888 members from several chapters stood out with signs on the Upper Common to publicly promote $15 and a union.  Click here to see pictures from April 14 march and rally. 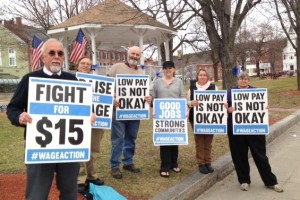 A recent Brookings Institution study shows that Boston is the third most inequitable city in the nation, with the top five percent of households earning 15 times what the bottom twenty make.

Tipped wage bill o Gradually eliminates the sub-minimum wage for tipped workers. o Mandates that after 2022, tipped employees would have the same hourly minimum wage as workers in all other industries in Massachusetts.