When City of Boston employee Damali Simmonds encouraged city councilors to extend paid family leave to more city workers, she offered her own story as proof of why such a policy is needed. Simmonds, who gave birth to a baby girl in April, told councilors at their April 22 meeting that she’d already exhausted her paid time off and has only six unpaid weeks of leave left under the Family and Medical Leave Act (FMLA). 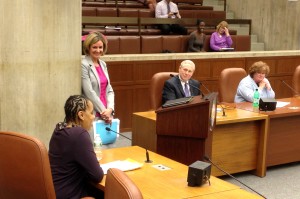 Local 888 member Damali Simmonds urges Boston City Councilors to extend paid leave to additional city work-ers like her. Simmonds recently had a baby and has already exhausted her paid leave.[/caption]

Despite strong support for extending the family leave benefit to Simmonds and all members from city councilors, the ordinance passed at the April 29 City Council meeting will only apply to 635 city employees who are currently not covered by collective bargaining agreements. The new policy excludes 7,152 union members who work for the city and 6,721 members who work for the Boston Public Schools. According to a doctor who testified, the new policy could end up widening disparities between classes of city workers.

Local 888 union leaders applauded the new policy, however the union has asserted that, "with regard to parental leave, our contract with the city simply indicates that the parties will follow whatever the city policy is" and "should apply immediately to all of our members…consistent with the language and intent of our contract." If the city disagrees with that interpretation, "then we respectfully request to meet immediately to execute a Memorandum of Understanding" so that "paid parental leave can be implemented for the members of SEIU Local 888 upon its passage by the City Council."

Strong support from the Boston City Council At the City Council vote, Councilor Tito Jackson rose to remind the council that the new policy did not cover unionized workers saying, "This inequity should be short lived."

Councilor Michelle Wu reminded the council of Damali Simmonds situation and said, "It's our time and our challenge to do the right thing and cover all of the city's employees."

Councilor Ayana Presley said, "We need to quickly revisit [this policy] to extend it to all employees in order to make it equitable."

Councilor Charles Yancey also weighed in to say that he, "Hoped the city and the unions could come together to make it a reality for all city employees. "

Local 888 General Council Jen Springer said, "City personnel officials have used our union contracts as a shield with statements like, 'We will negotiate the family leave benefit when union contracts expire.' However, waiting for expiration would delay implementation of the benefit by several years while women like Damali Simmonds and many other city workers need it now."

"We are ready to pursue any and every available means to achieve a quick resolution to this problem and equal treatment for our members," Springer added.