Did you know that Massachusetts has one of the largest income inequality problems in the country? And that our highest income residents pay the smallest share of their income in state taxes? 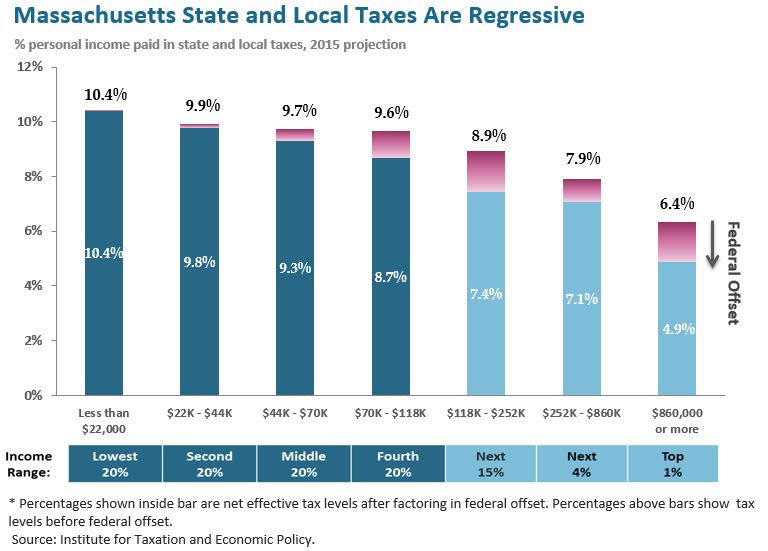 A tax system typically is composed of a variety of different types of taxes. Usually, the system will include some taxes that are progressive and some that are regressive. Regressive taxes sometimes meet other criteria of a good tax, such as enhancing stability of the overall tax system, and thus may be a valuable part of the overall system. When considering progressivity and regressivity, it therefore is important to examine not just individual taxes, but rather the overall tax system in a state.
As the chart below shows, overall, the Massachusetts tax system is regressive, collecting a larger share of household income from lower-income households than it does from upper-income households. This is primarily due to the property tax and the sales tax, each of which has the effect of taxing lower-income people at significantly higher rates than higher income people. (For more information on the property tax, see the property tax chapter of MassBudget’s tax primer. For more information on the sales tax see MassBudget’s Sales Tax Fact Sheet.)[/caption]

That’s why the Raise Up Coalition (strongly supported by all of the SEIU locals in Massachusetts) is planning a campaign to create a tax rate of 9 percent on incomes over $500,000 to raise new revenues that could allow for increased investments in education, child care and transportation.

Changing our state constitution will require a massive grassroots effort to gather 120,000 signatures of registered voters in the fall of 2015. Then supporters will have to convince 50 of 200 state legislators in two special meetings held during 2016-2018 to approve the change. Finally, voters would have to approve the change by a majority vote in the fall of 2018 election.

What do you think of this campaign for a more fair tax system? Do you think it will be worth the expense and cost of a three year effort? Do you disagree with the idea? Send your views and opinions to media@seiu888.org.

Learn more about Tax Fairness in Massachusetts by reading from the Mass Budget and Policy Center's research report.