When Anita Christon decided to attend a rally featuring Democratic presidential candidate Bernie Sanders, she had no idea what to expect. “I didn’t know anything about him,” says Christon. But the event, which drew some 26,000 people to the Boston Convention Center, really impressed Christon. “I’m really glad I went. It was a great event and just really inspiring.” 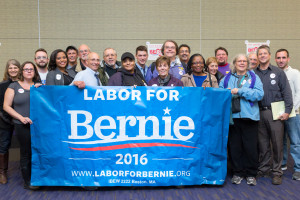 Local 888 and 1199 leaders and members joined many other union members at a rally with presidential candidate US Senator Bernie Sanders on Oct. 3 at the convention center in Boston. Union members attended a special pre-meeting with Sanders before the rally. Shown above is the SEIU contingent.[/caption]

Christon, who is Recording Secretary for Local 888 and works as a project manager for the Boston’s Department of Neighborhood Development, wasn’t the only union member on hand at the rally. In addition to many SEIU members, the Labor for Bernie contingent included nurses, Verizon workers, Teamsters as well as leaders and members of many other unions.

Nationally, SEIU has yet to make a decision about who to endorse in the 2016 presidential race.