After more than a year of protests by staff and faculty across the UMass system, President Marty Meehan has committed the university to funding $10.9 million in retroactive pay denied to faculty and staff by the previous president. 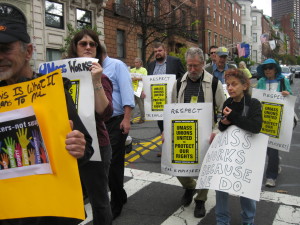 Staff and faculty from across the UMass system attended
a protest last fall. The workers successfully fought to get retroactive wages they were promised more than a
year ago.[/caption]

A total of 24 unions on the four UMass campuses negotiated new contracts in 2014, agreements that included millions intended for faculty and staff pay raises. But when campus leaders told workers that they couldn’t afford to pay for the raises, the result was a season of protest. President Meehan has indicated that he hopes the deal will start the school year on the UMass campuses “with a clean slate and with harmony.”

UMass Lowell chapter chair Janet King thanked Local 888 members there for helping to win the deal, and for their patience over the past year. “I want to thank everyone for their support as we navigated through this process,” said Janet King, UMass chapter chair. “It was a long and tedious process and the Local 888 staff worked hard with your bargaining team and UMass leadership to bring this to fruition.”