On November 10, working people who are building the Fight for $15 movement will stand up together for a day of national action.  Read about the Nov. 10 event planned in Boston here. 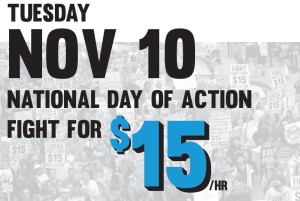 We’ll call on corporations like McDonald's to stop paying wages so low that we can’t make ends meet. We’ll continue to stand up for our right to stick together in a union. We’ll also call on elected representatives to change the rules so ordinary people can get a fair shot.

We’re sick and tired of corporations and the wealthy having so much power that they can manipulate the rules in their favor.

Too many African-Americans and Latinos are dying at the hands of police. It is time for real changes to make sure all Americans are treated with respect and dignity. That includes the millions of immigrants who do some of the toughest jobs in the country. They strengthen the backbone of America and deserve a chance to move out of the shadows and to become legal residents with a future opportunity for citizenship.

On November 10, Americans will be 363 days away from going to the polls to elect a new president and new representatives.  RSVP for the Nov. 10 event in Boston here.

So we will rally in front of city halls across the country to launch a new push to build a movement of $15 Voters. Our $15 Voter movement will mobilize our co- workers, families, and neighbors to elect people who will help us raise wages, strengthen our freedom to stick together in unions, make it easier to get quality home care and child care, ensure that black lives matter and fight for comprehensive immigration reform.

We will hold the rich and powerful to the same rules everybody else plays by.

Together, we can work to end racism and oppression and fight for work that is good for families in every community.

What's it like to live on $8 an hour? Chrisanna Capshaw is a mom – with a full-time job at Subway in North Carolina. She works hard to support her two kids – Pharaoh and Amariani. But at just $8 an hour, it’s simply not enough to get by.  After diapers and day care, her take home pay is exactly ZERO dollars.

So Chrisanna is fighting back. Watch her powerful testimony for $15 and union rights at a special wage board.

It’s simply wrong that a mom could work hard every day and STILL not be able to support her kids.  It’s time for $15 and union rights now – for Chrisanna, for her kids, for everyone.

RSVP for the Nov. 10 event in Boston here.