Oral arguments heard at the Supreme Court on January 11 highlighted what’s at stake for working people in Friedrichs v. California Teachers Association.  Friedrichs -- a case that billionaire extremists have pushed to the Supreme Court—is the latest in a long line of laws and lawsuits aimed at making it harder for working people to stand together, pool our resources and negotiate to improve our lives and our communities. 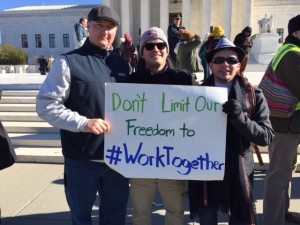 The groups behind this attack like the Center for Individual Rights are what working people dislike about Washington. They represent dishonest politics that ignore the voices of millions of working people around the country who have voluntarily joined together to form a union.

History has shown in cases like the challenges to the Affordable Care Act that it is impossible to predict from legal briefs or oral arguments how the Supreme Court will rule.

However the Supreme Court rarely overturns previously decided cases.  The justification for fair share fees was put in place over 40 years ago by a unanimous court that included six justices appointed by Republican presidents.

But it’s not just public service workers and their employers who depend on the stability of strong and stable labor-management relationships.  Everyone benefits from the better public services in our schools, hospitals, and communities where our friends and neighbors work to serve the public.

This case would have an especially disruptive effect on public safety. Unlike when so-called right-to-work was adopted in Wisconsin or Michigan, there would be no carve out for public safety, and contracts that have been negotiated with agency fees to allow for public safety equipment and training would disappear overnight

In the coming months, working people will continue to make our voices heard.  Over the next few months Local 888 leaders will be talking about why speaking up and having a voice on the job is good -- not just workers, but our country as a whole.

Wealthy special interests behind the Friedrichs lawsuit know that when workers are organized in unions, they make major gains like increasing pay and benefits —victories that interfere with these billionaires’ extremist agenda. For example, thanks to people banding together in the Fight for $15 movement, more than 11 million people across the country have won raises.

Why should someone be compelled to pay a fee that the union then turns around and uses to support political causes that worker opposes?

No one has to be involved in political work or pay for it. That’s the law already, and this lawsuit will not change that. People contribute to the costs of negotiating agreements that improve our pay, benefits and other working conditions.

Everyone has the freedom to choose whether or not they want to contribute to support advocacy around issues that impact their lives outside of the contract—and there's nothing more democratic than that.