A delegation of ten delegates and three alternates attended SEIU's quadrennial International Convention in Detroit from May 19 - 24. 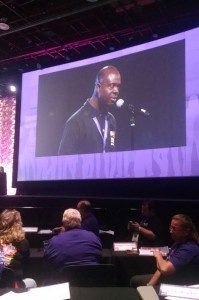 Mary Kay Henry was reelected President along with a slate of seven Executive Vice Presidents and 37 Executive Board members.

The convention passed resolutions in support of the Fight for $15, against racial injustice, and alongside AFSCME, in support of protecting members of our unions and those that want to be part of one.

Secretary-Treasurer Brenda Rodrigues did a great job as our "whip" for the Local 888 table.

Kwesi Ablordeppey (Holyoke Soldiers Home) stood up at the microphone and spoke out against racism and other social injustices.  He received a huge applause from the entire convention.

Sue Noel (Dracut) stood with Hillary Clinton on stage while she addressed the convention and got a hug from her afterwards.

Local 888 delegates enjoying a meal while at the SEIU convention.[/caption]

Local 888 got a shout out from Mary Kay Henry for our participation in the Clinton campaign and support of workers on strike at Verizon.

This convention was a huge success and the strong participation by members of the Executive Board made it one of the best conventions I have ever attended.