A new book, Dark Money: The Hidden History of the Billionaires Behind the Rise of the Radical Right, by Jane Mayer describes the effort by right wing billionaires to remake our political system and control the terms of the debate through foundations, think tanks, and university institutes. 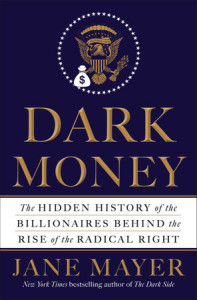 A review of the book is reprinted below.  Win a free copy of this new book!  Enter a raffle by emailing rwilson@seiu888.org. Put the words "Dark Money" in the subject line and include your name, work location/chapter and phone number.  Winner will be drawn on June 30.

JANE MAYER’S DARK MONEY: The Hidden History of the Billionaires Behind the Rise of the Radical Right is almost too good for its own good. On the one hand, this tale of how the Koch brothers persuaded “hundreds of the other richest conservatives in the country to give them control over their millions of dollars in contributions” compels us to read on. On the other, the story is so outrageous it should make any citizen want to go out and do something about it. So likewise, read on here, but if you should decide that you’ve just got to stop and get on with changing things — well, that’s the point.

The seemingly unlimited and often untraceable money now flooding our political system has everything to do with Citizens United — the Supreme Court’s 2010 ruling, by a 5-4 majority, that the First Amendment to the Constitution precludes the government from restricting independent political expenditures. But Mayer’s book goes way past that, describing an exceedingly impressive effort by the United States’s right wing to remake our political system and control the terms of the debate through foundations, think tanks, university institutes, and even by paying political commentators to sing their song.

The Koch brothers, David and Charles, heirs to Koch Industries, now the second largest privately held company in the United States, are each ranked 5th to 10th out of the wealthiest individuals in the world. (There are four brothers in all and Mayer tells the entire family history, but these are the two most commonly identified as “the Koch brothers.”) Combined, their wealth, estimated between $80-$95 billion, constitutes the largest single fortune on earth. When they talk, the littler billionaires and the wannabe billionaires tend to listen; when the brothers concluded their 2015 annual winter donors conference they were able to announce commitments of $889 million for electing conservatives in the 2016 presidential and congressional races — more than the combined total spent by the Republican National Committee and the party’s two congressional campaign committees in 2012.

The group’s goals are fairly straightforward. Mayer quotes Richard Fink, “introduced as Charles Koch’s ‘grand strategist,’” telling the donors’ 2014 summer conference, “We want to decrease regulations. Why? It’s because we can make more profit, okay? Yeah, and cut government spending so we don’t have to pay so much taxes.” He did, however, remind his audience that the “middle third” of the electorate, the sector that can go either way, would not likely respond to such a frank presentation. Instead the donors would need to “launch a movement for well-being,” arguing, for instance, that minimum wage legislation denied the “opportunity for earned success” to an estimated 500,000 Americans who would want the chance to work for less than $7.25 an hour.

It is the infrastructure developed to create such “movements” that constitutes the real subject of Mayer’s book. She traces its roots back to the Watergate scandal, after which “conservative think tanks pitched themselves to businesses as the safest way to influence policy without scandal.” Among the early movers was Richard Mellon Scaife, heir to the Mellon family fortune and “the leading financial supporter of the movement that reshaped American politics in the last quarter of the 20th century,” according to The Washington Post. After donating nearly $1 million to Richard Nixon’s 1972 reelection campaign (equivalent to about $5.5 million today) through 330 separate front groups, Scaife turned to the intellectual front and became the largest backer of the conservative Heritage Foundation.

Heritage came into full bloom following Ronald Reagan’s 1980 election, when he gave every member of Congress a copy of its program, Mandate for Leadership. According to the foundation’s president, the Reagan administration ultimately adopted 61 percent of their 1,270 separate policy proposals. Perhaps most significantly, Mayer notes that, “Between 1981 and 1986, the top income tax rate was cut from 70 percent to 28 percent.”

Scaife himself subsequently became obsessed with bringing down Bill Clinton, believing that White House aide Vincent Foster had been murdered and telling an interviewer that Clinton “can order people done away with at will.” Hillary Clinton once considered him the center of a “vast right wing conspiracy” to bring down the Clinton administration, but after the two finally met, Scaife would describe his feelings toward her as “very favorable indeed.” As for Heritage, more recent activities have included donating $2 million to Premiere Networks, the operation that syndicates Rush Limbaugh’s radio show. Mayer also reports that FreedomWorks, another Scaife-funded operation, has paid Tea Party bell ringer Glenn Beck over $1 million for reading “‘embedded content’ blended […] seamlessly […] Making it sound as if it were his opinion” on his Fox News broadcasts. This arrangement was “described on FreedomWorks tax disclosures as ‘advertising services.’” Free thinking does not come cheap these days.

Another early player was John M. Olin of the Olin Corporation, a chemical company that began to run afoul of the government soon after the creation of the Environmental Protection Agency in 1970. Olin’s greatest ambition, Mayer writes, was “to see free enterprise reestablished in this country” so that “[b]usiness and the public […] awakened to the creeping stranglehold that socialism has gained here since World War II.” By the time his eponymously named foundation spent down all of its assets in 2005, as his will stipulated, it had laundered money for the CIA, financially supported right-wing commentator William F. Buckley Jr.’s Firing Line television show, and spent more than half of its $370 million “bankrolling the promotion of free-market ideology and other conservative ideas on the country’s campuses.”

The Kochs too entered the picture in a significant way following company run-ins with the government, converting a family foundation into the Cato Institute after allegedly violating oil price controls in 1974 and overcharging for propane gas in 1975. Mayer writes that,

It’s difficult to disentangle Charles’s [Koch] philosophical opposition to regulations from his financial interest in avoiding them […] What is indisputable is that whatever the motivations were, in the quarter century between 1980 and 2005, under Charles Koch’s leadership, his company developed a stunning record of corporate malfeasance.

This included a 1999, then-record $296 million wrongful death judgment resulting from a corroded pipeline; a $30 million fine for Clean Water Act violations in 2000, also a record at the time; a 1989 Senate finding of stealing $31 million worth of oil from Indian lands; and a 1999 jury finding that the company had made 24,587 false claims to the government. In 2010, Koch Industries was rated one of the top 10 air polluters by the Political Economy Research Institute at the University of Massachusetts Amherst; in 2012 the EPA called the company the country’s number one producer of toxic waste.

By the late 1980s, Cato and the Kochs had embarked on what Mayer describes as “a libertarian production line,” starting with “an ‘investment’ in intellectuals whose ideas would serve as the ‘raw products,’” followed by “investment in think tanks that would turn the ideas into marketable policies,” and finally the “subsidization of ‘citizens groups’ that would, along with ‘special interests,’ pressure elected officials to implement the policies.” By 2015, she writes, Charles Koch “was subsidizing pro-business, antiregulatory, and antitax programs in 307 different institutions of higher education in America and had plans to expand into 18 more.” Some of the resulting work was, well, interesting, such as that of Susan Dudley, of the Koch-funded Mercatus Center at George Mason University, who argued that in proposing emissions controls on oil refineries, the EPA failed to take into account the beneficial aspects of smog, which she argued would prevent as many as 11,000 additional cases of skin cancer that might occur if the nation’s air were cleaned. One former professor reports that applicants to the Koch-funded Institute for Humane Studies on the same campus had their application essays run through a computer program that tallied the mentions of right wing notables such as Ayn Rand and Milton Friedman — the more the better was the idea. Numerous colleges have accepted programs whose funding required the teaching of Rand’s work.

In the overtly political realm, attention naturally tends to focus on the national level where the Kochs’ efforts are the culmination of a dramatic turnaround from 2004, when the $185 million spent by Democratic-aligned outside groups was more than twice that of their Republican counterparts. Particularly significant in the shift was the so-called “hedge fund switch,” following President Barack Obama’s support of (ultimately unsuccessful) legislation to eliminate the “carried-interest loophole” that allows the taxing of fund managers’ income at the lower capital gains rate. Stephen Schwarzman, CEO and chairman of the Blackstone Group, compared the proposed change to “when Hitler invaded Poland in 1939.” Others didn’t go quite that far, but Mayer quotes Republican Senate Majority Leader Mitch McConnell acknowledging that “a spending edge is the only thing that gives a Republican a chance to compete,” as well as telling colleagues, “If we can stop this thing [proposed campaign finance regulation], we can control the institution for the next twenty years.”

But the spending on the lower levels is equally important — and much less well known. In 2012, Democrats won more overall votes in congressional races, and yet Republicans won the House. Some of this is due to the concentration of Democratic votes in cities and some to gerrymandering in state legislatures, for which, Mayer writes, North Carolina has become “something of a test kitchen.” Acknowledging that this is “a bipartisan game as old as the Republic,” she argues that what was “different after Citizens United was that the business of manipulating politics from the ground up was now heavily directed and funded by the unelected rich.”

And then there is the American Legislative Exchange Council, which Scaife funded in the 1970s and now produces as many as a thousand bills a year for state legislators to introduce as their own. Mayer reckons that about 200 of them become law. Although organized as a educational organization, ALEC’s members-only newsletter has described it as “good investment” for companies because, “Nowhere else can you get a return that high.” In 2009, the Franklin Center for Government and Public Integrity came online with bureaus in 40 states to disseminate news stories based upon the work of the 64 think tanks belonging to the State Policy Network, an operation funded — by the usual sources — at over $83 million in 2011. Twenty-nine of its think tanks are members of ALEC. And all of this, of course, is tax-exempt, nonpolitical, charitable work.

There are inherent limitations, however: the “confidential investors update” of Americans for Prosperity — the actual name of the Kochs’ political organization — acknowledged that “Americans in general are concerned free-market policy — and its advocates — benefit the rich and powerful more than the most vulnerable in society,” and concluded, “We must correct that misperception.”

A light may actually have appeared at the end of the tunnel since the publication of this book. Just a year ago, if you said that a presidential candidate could run a competitive race by rallying people against the idea of billionaires controlling our political system and could fund that campaign with people giving 25 bucks a pop, you’d probably have put yourself in line for a psychiatric evaluation — or at least a urinalysis. But voila: In February 2016, the Bernie Sanders campaign set a monthly presidential fundraising record of almost $43 million, and in March, broke it with $44 million — not with the money of billionaires, but with contributions averaging $27! The Kochs and their ilk have done, and are doing, a lot of work that needs to be undone. But it does appear that there might be millions of people prepared to take up the fight.