Delegates at the Local 888 Membership Convention on September 24 reviewed the union's finances and set goals for the future.  Members unanimously approved three resolutions: 1) Urging "No on Question 2" – to lift the cap on charter schools. 2) In support of a new "Millionaires tax" to raise money for education and infrastructure, and 3) To "Fix Massachusetts Schools." 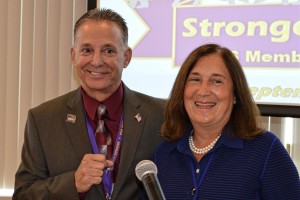 "By all accounts we had a great meeting!" said Local 888 President Mark DelloRusso. "Members had an opportunity to meet their officers and staff and hear from State Treasurer Deb Goldberg.

The other convention guest speaker was award-winning author and commentator, David Cay Johnston. 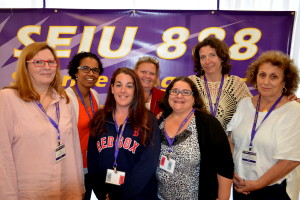 For copies of the finance report email brodrigues@seiu888.org.

To see more pictures from the convention, visit https://flic.kr/s/aHskEoh254.

For copies of the convention program with department reports and the resolutions adopted by the delegates, email rwilson@seiu888.org or call 617 241-3300. 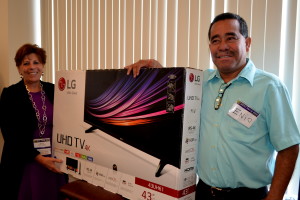 Convention prize winner! Congratulations to Enio Lopez who works at the Chelsea Soldiers Home for winning the flat screen TV door prize at the Local 888 convention.[/caption]