Jonathan Dudley, a Gardner Head Start teacher with the Montachusetts Opportunity Council, wanted to show that when workers in North Central Mass. take a stand, they do not stand alone.  After learning about a lock-out at the hardware chain Aubuchon, Dudley launched an online fundraiser. Within a week, more than $1500 in donations from across the country flooded in. 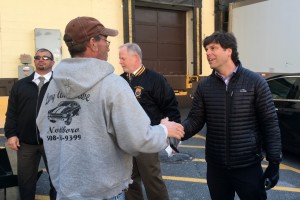 Jonathan Dudley (at right), congratulates a locked-out Aubuchon Hardware warehouse worker just prior to giving him a Thanksgiving turkey.[/caption]

"I was really proud that workers at Aubuchon were standing up to outsourcing, but found it heart breaking that they were locked out just a few weeks before the Thanksgiving Holiday and with winter on the way," explained Dudley. "I believe in solidarity, and that means showing up for each other when it counts."

Dudley works with members of Teamsters Local 170 who drive the buses that transport children to the preschool where he is a teacher.  He reached out to the Teamsters and his own union to support his idea to have an online fundraiser to buy Thanksgiving turkeys for each of the locked-out warehouse workers. The locked-out Teamsters added the fundraiser to their Facebook page, and word about the effort spread.

The lock-out began because union members rejected new contract language that would have facilitated out sourcing. On Nov. 18, Teamsters Local 170 and Aubuchon reached an agreement to end the twelve-day lock-out. Workers now have a three-year contact that offers ample protections for good local jobs. Dudley hopes the community support represented by the turkey fundraiser helped encourage Aubuchon to settle with the union. 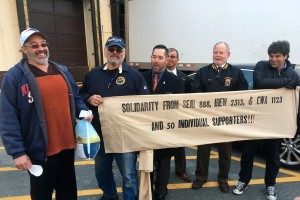 "Nobody wanted to see the Aubuchon workers eating Thanksgiving dinner on the picket-line or consumers refusing to shop at Aubuchon stores on Black Friday," says Dudley. "I wanted the locked-out Teamsters members to know that the community had their back."

SEIU Local 888 which unites area child care and Head Start workers; Gardner Department of Public Works employees made an organizational contribution, as did a Communication Workers local from upstate New York.  Head Start employees from Athol to Fitchburg took up a collection at work, and so did workers at the Verizon call center in Gardner.  The call center workers are veterans of the seven-week long Verizon strike that ended last June.

"It made me so hopeful to hear that the IBEW members at Verizon were taking up a collection,” says Dudley. "They took a stand against outsourcing and won, now they’re supporting local warehouse workers to do the same. This Thanksgiving I'm thankful for solidarity!"

News articles about the turkey distribution appeared in the Sentinel & Enterprise and the Gardner News.