Local 888 is a member of the Raise Up Massachusetts, a coalition committed to building an economy that works for all of us.

Raise Up won a significant increase in the minimum wage in June 2014 -- raising it from $8 to $11 over three years. Raise Up then led the campaign to ensure access to earned sick time for all workers by passing Question 4 in November 2014.

In 2015 and 2016, Raise Up passed a paid family and medical leave bill in the state Senate, fought to win a $15 wage for working people as part of the national Fight for $15 movement, and won the first of two votes by the full state Legislature needed to advance a new Fair Share Amendment to the 2018 ballot. 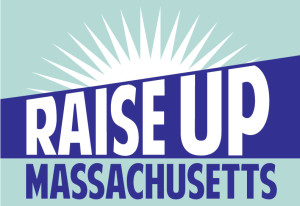 Next Steps This year, Raise Up is focusing on winning three issues of critical importance to working families in Massachusetts:

New fact sheets to help educate your coworkers, friends, and family about these three campaigns are available from Local 888. Email rwilson@seiu888.org