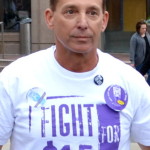 Republicans in Congress are pushing a national Right-to-Work bill, but it's not what it seems: that's why we call it a "Right-to-Work-for-less" bill.

The legislation calls for prohibiting unions from charging fees to nonmembers for the costs of representation. Similar bills have been passed at the state level in 28 states.

In states where right-to-work has already been enacted, it has driven down wages and turned more full-time union jobs into part-time jobs with no benefits.

Some good news: Workers won a major victory in New Hampshire on February 16 when lawmakers in the House rejected a right-to-work bill that was supported by Governor Sununu.

Now we have to defeat RTW at the national level. The first step is signing a petition addressed to all Members of Congress.

Studies show that wages in states with right-to-work laws are 3.2 percent lower than in states without them. That translates to more than $1,558 per year. Ask yourself, do we really want a law that could lower wages by 3.2 percent?

Politicians need to focus on making the economy work for working people, which means investing in good jobs and respecting people's right to negotiate for fair wages, safe working conditions, retirement security and healthcare. Right-to-work does the opposite.

Nowhere is this clearer than in Minnesota and Wisconsin. Following the recession, these two neighboring states took entirely different approaches. In Wisconsin, Republican Gov. Scott Walker pushed through anti-union right-to-work laws, and his state's economy has been, at best, sluggish. In Minnesota, with Democratic Gov. Mark Dayton's pro-union agenda, the state has led the region in recovering from the recession and in job growth.

That's why we need to stop Right to Work dead in its tracks at every level. A progressive coalition is gearing up to make sure right-to-work never becomes law nationwide. But we can't win without your help.