Working families disproportionately experience high pollution levels by being exposed to environmental hazards both at home and at work. The toll of environmental injustice is a reality for far too many. 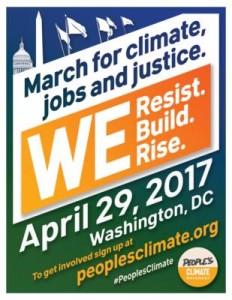 Healthy, vibrant communities cannot survive without clean air to breathe and clean water to drink. That's why SEIU Local 888 is urging members to join the People's Climate March on April 29, 2017.

Since Trump was elected president, there have been many inspiring acts of resistance. When working people come together and raise our voices it sends a message that we won't tolerate going backwards.

At the 2014 climate march, Local 888 member Enio Lopez traveled to New York City and locked arms with airport workers, health care workers, and nearly 400,000 other concerned citizens for our environment. It was the largest such demonstration in our nation's history.

With politicians scheming to kill laws that protect our air and water, it's time to speak up and rise up again.

From the Fight for $15 to Black Lives Matter and the Women's March, working people are becoming more united against a political system that is clearly rigged against us.

Show your support for future generations to have a healthy and safe environment in which to live and prosper. Join our growing resistance: on April 29, the 100th day of Trump’s presidency, lift your voice in the People's Climate March in Boston.

The climate action movement is growing and getting stronger every day because working people around the nation have joined the call to demand solutions that will protect our communities for generations to come. Join the movement.