Local 888 member Jonathan Dudley (above at left) organized a meeting last July in Gardner for Central Mass residents to share their experiences and learn more about how NAFTA has impacted their communities. 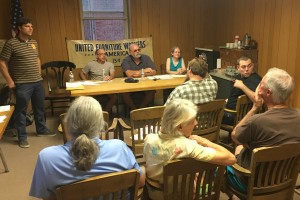 At the meeting, participants discussed how to make sure Pres. Trump replaces the North American Free Trade Agreement (NAFTA) with a deal that is good for working people and communities in all three North American countries.

NAFTA was negotiated by the Bush administration, signed into law by Bill Clinton in 1994. Some estimate that there have been 9 million NAFTA-related job losses in the US.

There is no guarantee that the Trump administration will make changes to NAFTA that actually benefit working people or communities, instead of just extending the many ways it benefits multinational corporations.