Local 888 is a member of Raise Up Massachusetts, a coalition of grassroots, religious, and community groups working to win a new $15 minimum wage and Paid Family and Medical Leave benefit. We are collecting signatures to put both measures on the ballot in November 2018. 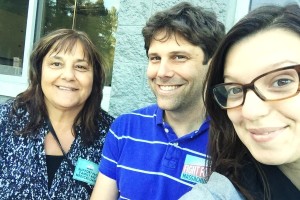 "The agency I work for just released its strategic plan," said Local 888 member Jonathan Dudley who is collecting signatures in Central Mass. "With high poverty rates and income inequality in North Central Mass, the plan cited reducing barriers to living wage jobs as a major goal. But what if we reduce barriers and none of the jobs in the area pay a living wage? I work with families that are struggling. I know the difference $15 an hour would make in their lives. Heck, many of my co-workers make less than $15 an hour. It would make a big difference in our lives!"[/caption]

As union members with these benefits, we know that raising the minimum wage to $15 an hour by 2022 as the legislation calls for, will make it easier for people who work full time to earn enough money to make ends meet. Paid Family and Medical Leave will ensure that MA workers are not forced to choose between work and their own health needs or the well-being of their family members.

Community groups and unions across the state are collecting signatures to get these initiatives on the ballot. All together they need 250,000 to do this!