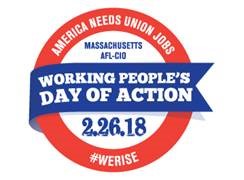 On February 26th, thousands of working people across Mass-achusetts will join a national day of action as we speak out for the good, union jobs our communities need.

The Working People's Day of Action coincides with the Supreme Court hearings on the Janus vs. AFSCME case. That case is part of a well-funded campaign by wealthy special interests to divide us from our co-workers – and to limit the power in numbers we have together in a union.

Fifty years ago, in February 1968, Dr. Martin Luther King Jr. joined striking sanitation workers in Tennessee as they fought for the freedom to join together in a union for dignity and respect on the job.

Sign up to participate in actions on Feb. 26 to defend the very freedoms for which Dr. King fought and died, including the freedom to join a strong union for a better life. Use the online form here: https://goo.gl/forms/OmD8SiUnhyrZ5a5y2 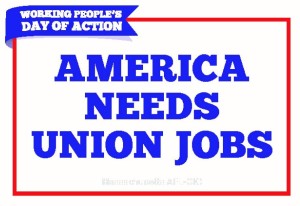 One of the five stickers that thousands of members will be wearing on Feb. 26.[/caption]

"In our glorious fight for civil rights, we must guard against being fooled by false slogans, such as 'right-to-work.' It provides no 'rights' and no 'works.' Its purpose is to destroy labor unions and the freedom of collective bargaining… We demand this fraud be stopped." – Dr. Martin Luther King, Jr., 1961