Poor people, clergy and activists held a news conference at the State House on Feb. 5 to serve notice on state legislative leaders that their failure to address the enmeshed evils of systemic racism, poverty, the war economy, ecological devastation and America's distorted national morality will be met this spring with 6 weeks of direct action - including one of the largest waves of nonviolent civil disobedience in U.S. history. 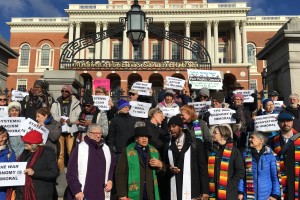 The event was one of over 30 held at state capitols and the U.S. Capitol, marking the first nationwide action by the campaign since it launched on Dec. 4 -- 50 years to the day after Dr. Martin Luther King Jr. called for the original Poor People's Campaign.  SEIU is supporting the campaign. Learn more here: https://poorpeoplescampaign.org/