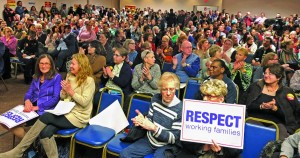 Without consulting labor unions, Governor Baker pushed through massive healthcare changes for state employees in mid-January. On January 18, the Group Insurance Commission (GIC), made a rushed decision to limit the health insurance options for 450,000 state employees and retirees who receive benefits. The decision cut plan offerings from Harvard Pilgrim Health Care, Fallon Community Health, and Tufts Health Plan. The changes would have taken place on July 1 2018.

The final proposal was only released to the GIC board members only hours before consideration of the vote. The Attorney General’s office is now conducting an investigation into whether this violated the open meeting law. The publicly available agenda for the meeting listed the item under "Procurement" as "Medical/Behavioral Health Decision – VOTE."

In the ensuing backlash that unfolded, the GIC announced a reconsideration at its February 1 meeting. At that meeting, members voted to overturn the decision made on January 18. Local 888 President Mark DelloRusso said, "Workers should have a stronger voice in GIC decision making. It looks like the Governor heard the voices of hundreds of thousands of those affected by their bad plan. We need to stay vigilant in the next few weeks to make sure costs to employees don't increase."

In the coming weeks, the GIC will make decisions about rates and plan designs, so the fight is far from over. All SEIU Local 888 members are urged to keep the pressure on at the GIC's upcoming meetings and to work towards increasing public input and labor's influence on the Commission.

Were you outraged by the GIC decision? Concerned about rising health insurance premiums? Email rwilson@seiu888 to get more information and a one-page flyer about reforms at the GIC.

HOW WE CAN STOP IT FROM HAPPENING AGAIN: THE GIC NEEDS REFORM 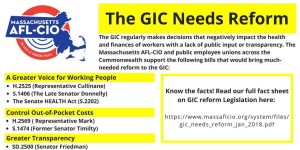 The recent decision by the GIC highlights the larger problem that the GIC regularly makes decisions that negatively impact workers with a lack of public input or transparency.

Currently there are a number of bills that would reform the GIC:

Click here to see the fact sheet put out by the Massachusetts AFL-CIO.