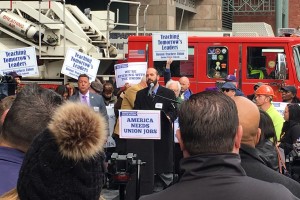 Public Defender Makis Antzoulatos (pictured above) who works for CPCS at the Boston Superior Court spoke at the Boston #WeRise rally about how our politicians and our courts shouldn't be trying to limit our power in numbers. "Lawyers and legal workers at the public defender agency deserve the right to collectively bargain. This will benefit them as workers, and as importantly, will benefit the communities they serve." [/caption]

Public defenders across Massachusetts are demanding the same collective bargaining rights that all other state employees have. While they are state employees, the state law omitted their right to collectively bargain and organize. This lack of fairness, along with low pay and a lack of predictable career paths, creates high turnover and instability. On March 6, public defenders rallied across the state for their right to collectively bargain.