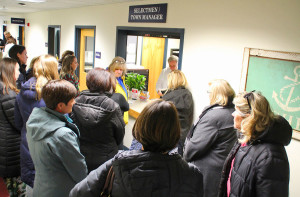 Teachers from Kenneth C. Coombs School gathered outside the town manager's office in Mashpee to support the custodian who lost his job.

A custodian at Mashpee High School won back his job after he was wrongfully moved to a different shift at another school following an incident with a student. Union staff won the grievance and the case was helped with an impressive show of union solidarity from supportive teachers at the school, who brought a petition to the town manager’s office requesting they keep their custodian who they say is very “well and widely respected." When working people stand together, we win! The victory was an example of a union’s “just cause” protections in action.