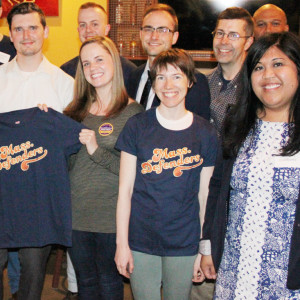 FOR THE DEFENSE: Public defenders want the same union rights as all other state workers.[/caption]

Massachusetts public defenders met after their state agency’s May conference in Worcester – to talk up their ongoing drive to win collective bargaining rights, which all other state workers already have by law.

Local 888 President Brenda Rodrigues urged the public defenders to keep up the fight. “Local 888 has supported you from the beginning and will continue to support you.”

The lawyers are calling on the state Legislature to amend the law. MassDefenders and their supporters have rallied across the state in recent months for their rights – holding signs saying “Give us a voice!” and “Support H. 1426.” This refers to the Massachusetts House bill, which has gained support among a huge majority of legislators but gotten stuck in committee.