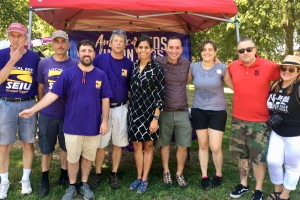 LABOR DAY IN LAWRENCE: SEIU members, staff and friends were on hand for the Bread and Roses Heritage Festival.[/caption]

Local 888 members marked Labor Day, which honors workers in a variety of ways. Members took part in the 34th annual Bread and Roses Heritage Festival on Labor Day on the Lawrence Common with an informational booth at the festival.

All ages came out to celebrate the Labor Day festival. Children took in pony rides, balloons and a reptile exhibit. Entertainment ranged from a local brass band to a multimedia production, performed by poets, dancers and actors.

For her part, Teresa Riordan, a Local 888 E. Board member, talked up the importance of Labor Day with her fellow Westwood town workers. She noted the upsurge in union activism seen across the country – including teachers strikes in such "right to work" (for less) states as West Virginia and Arizona.

In fact, a recent Pew Research Center study that found that a majority of young people have a favorable view of labor. And, the numbers of union members grew last year by 262,000. Three-quarters of those new recruits were under the age of 35.

A surge in activism among young people has also fueled the Fight for $15, Black Lives Matter and #MeToo protests movements.