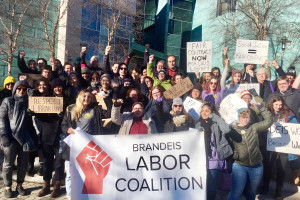 GAINING SUPPORT: Members of the wider Brandeis University community join with the school's Local 888 librarians in a midday rally.[/caption]

Brandeis librarians were joined by more than 50 supporters at a lunch time rally on Dec. 3. The librarians are demanding a fair contract and, accompanied by several supporters, delivered letters of support from the wider university community. On the cold windy day, speakers led the sign-waving group in chants calling for fair contract.

"All we’re asking is to be treated with dignity and the acknowledgment that we do important work," said librarian Joanna Fuchs. "We love our jobs and want everybody in this community to be a success."

"First as a student, and now as an faculty member, I want to say that the librarians have been there for me — on off hours and on short notice," said Drew Flanagan, a Brandeis English lecturer and shop steward for the adjunct professors union, SEIU Local 509. Flanagan said that he had delivered letters of support to the Brandeis administration on behalf of Local 509 members, and urged others to voice their support for the librarians.

"Having a fair union contract is a basic right – and being able to be respected at your job is a basic right," said Alina Sipp-Alpers, a sophomore at the school and member of the Brandeis Labor Coalition. Noting the many testimonials in praise of librarians' role at Brandeis, she added that students and the labor coalition were "a part of the librarians' fight for a contract!"

Click here to see more pictures from the rally.

A small group of representatives left the rally to deliver more letters of support to university officials inside the administration building, where the rally was held.

"We sent a powerful message to the administration," said librarian Aimee Slater when the group returned to the rally. She added that the librarians "will be there to support anyone else going through this kind of struggle."

Slater, a member of the Local 888 negotiating team, emphasized the protest did not mean there would be an upcoming interruption in library service. "We want to help all of you students as you go through your exams."

The librarians have been locked in a contract dispute since June. And the administration has refused to bargain fairly.

"So far, we’ve been the ones to reach across the bargaining table seeking to come to an agreement," said Surella Seelig, a librarian and member of the bargaining team. "But the university has just been playing games, making it sound as if there’s been movement on their part."

However, the library staff have successfully gained support from students, parents and the wider Brandeis community. In October, the librarians set up a table at the Brandeis Family Weekend – educating students and parents about their fight for a fair contract.

For its part, the Brandeis Labor Coalition has written in support of the librarians in the Brandeis Hoot, the community newspaper.

Click here to email or call Brandeis University President Ronald Liebowitz with a message of support for the librarians.