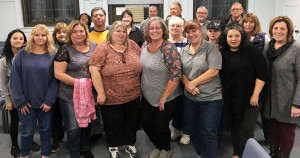 To top it off, two grievances were settled in union members’ favor last month. The school district has agreed to a more liberal policy for members on maternity leave and to properly post additional work so that members can bid on it.

“Members have really seen the benefit of joining together as a team, with the result that we’ve made good strides forward” said Larry Higgins, Local 888 internal organizer. “Previously, members had an attitude that nothing was ever going to change — but they have now changed their minds,” said Higgins.

The new three-year contract includes, for the first time, step raises — which recognize workers for service and dedication, but also for becoming better at what they do.

With the improved contract language, workers will receive a minimum of 3 percent annually in raises each year of the contract. In addition, the contract includes an improved grievance and arbitration procedure.

“We’ve broadened the number of chapter leaders in the process,” Higgins said. Instead of only having a couple people taking responsibility for the chapter, there are now seven. This broader representation of members includes a couple of Spanish-speakers in the new leadership.