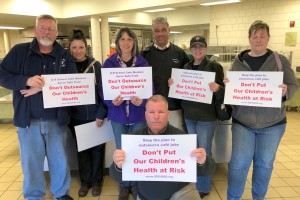 The Groton-Dunstable Regional School Committee is looking to cut costs by slashing the benefits of the cafeteria workers through outsourcing. Local 888 members are not giving up without a fight.

About 25 members and their supporters filled the audience at the March 27 School Committee meeting wearing Local 888 T-shirts. Members gave the committee a piece of their mind — and tempers flared.

The committee aims to save a pittance at best — perhaps $70,000 in the first year, $90,000 in the third year of the contract — by eliminating health care benefits for most of the workers.

School Committee member Marlena Gilbert sent an email saying she was "concerned about the stress of the unknown for the café staff."

"If the School Committee is really concerned about our well-being, then why are they outsourcing our jobs?" said cafeteria worker Dorynda Auth.

The current Local 888 contract runs out June 30. The School Committee is considering outsourcing the cafeteria operation to Whitsons Culinary Group.

However, Whitsons is the same vendor that the Boston Public Schools got rid of less than two years ago after complaints from parents and health advocates about poor quality and bad-tasting food. Whitsons has run into similar problems in Brookline. "It’s the worst food,” said one food-service worker, “I would not feed it to my cat."

The company has been mired in other controversies as well. As reported by MassLive.com, the head cook at Longmeadow High School was fired for alleged sexual harassment less than two years ago. The accuser and another worker said that when complaints had been made about the cook previously, those who voiced their grievances had been fired.

In addition, Whitsons was forced to pay $1.6 million to settle with the state of New York amid accusations the company overcharged school districts in violation of contracts as well as state and federal regulations.

Altogether the Groton-Dunstable Regional School District has 2,771 students and goes from elementary grades through high school.

A school district report found that, “Benefit costs could be reduced by as much as $90,000” by outsourcing the cafeteria. It also said that the school district “does not seem to be unhappy with the quality of its food service operation, but benefits constitute a significant net cost for the program.”

The Lowell Sun reported in May 2014 that a Groton-Dunstable Educators Association member read the School Committee a prepared statement — slamming the talk of privatizing cafeteria and maintenance duties. The statement noted that the changes would be made as part of the district's attempt to save money after the schools needed millions of dollars to plug a budget hole in fiscal year 2015.

That situation was solved when Groton and Dunstable residents OK’d the needed increase in funding. Of course, saving some tens of thousands of dollars by eliminating workers’ benefits would not have gone far — even if it worked — toward plugging a budgetary hole of millions of dollars.