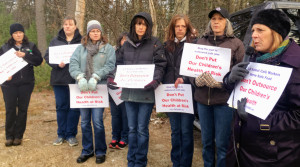 FOOD FOR THOUGHT: Local 888 President Brenda Rodrigues speaks as Groton-Dunstable school cafeteria workers rally to save their jobs and benefits.[/caption]

Groton-Dunstable school cafeteria workers united in Local 888 rallied April 10 to protest a proposal to cut costs by slashing benefits. The cafeteria workers and their supporters, including parents and students, then packed a meeting where the board discussed the outsourcing plan.

“I’m pretty angry that, after 15 years of working for the district, I and my co-workers are having to fight to keep our jobs and benefits,” said Dorynda Auth, a leader of the Local 888 cafeteria workers chapter.

The Groton-Dunstable Regional School Committee’s proposal is to have Whitsons Culinary Group take over the food service operation — with the key goal being slashing the benefits of 23 school workers.

Auth, who gets health insurance through her job, said that the cafeteria staff’s turnover is low – except for those working less than 4 hours a day. They get no benefits.

The district’s proposal “sends a message that people don’t matter, money does,” said Michael Shea, a parent of Groton schoolchildren and a teacher in nearby Chelmsford. “Outsourcing is not innovative thinking; a corporation like Whitsons only cares about one thing: profits.”

“I care about the children, and I understand their health issues,” said Karen Nardone, a 10-year Groton-Dunstable cafeteria worker. She talked about making sure a boy who had an allergy to peanuts was served the proper food. “That boy should feel safe when he comes to school; these children deserve quality service,” said Nardone.

“My daughter has severe peanut allergies,” Eric McKenzie, a Groton-Dunstable parent, told the school board. “One safe place for her is the school cafeteria.” McKenzie added that one cafeteria worker actually calls him up to make sure new products will be safe for his daughter.

“The cafeteria workers are our neighbors — they’re part of the community,” McKenzie said.

“I’m really heartbroken that I have to be here tonight,” added Groton-Dunstable parent Valerie Edwards. “We shouldn’t have to be fighting for these women’s jobs.” She vowed to write emails to local officials telling them: “These people’s jobs should stay, and the food quality they provide should stay.”

“You should know that we will keep fighting to preserve these workers jobs,” Local 888 President Brenda Rodrigues told the school board. “They are people who live in the community, and they deserve to keep their jobs.”

The committee aims to save a pittance at best — perhaps $70,000 in the first year, $90,000 in the third year of the contract — by eliminating health care benefits for most of the workers. A school district report on outsourcing said that, “benefits constitute a significant net cost for the program.”

Altogether the Groton-Dunstable Regional School District has 2,771 students and goes from elementary grades through high school. The current Local 888 contract runs out June 30.

For its part, Whitsons has been hit with harsh criticism and even legal action. It is the same vendor that the Boston Public Schools got rid of less than two years ago after complaints from parents and health advocates about poor quality and bad-tasting food.

In addition, Whitsons was forced to pay $1.6 million to settle with the state of New York amid accusations the company overcharged school districts in violation of contracts as well as state and federal regulations.

Is privatization a threat where you work? To get resources and tips on how to fight privatization, email rwilson@seiu888.org.